I Become A Burdensome Child After Transmigrating 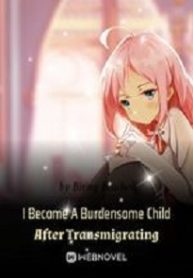 I Become A Burdensome Child After Transmigrating Average 4.3 / 5 out of 15

I Become A Burdensome Child After Transmigrating

When Su Jiu dies on her eighteenth birthday, she transmigrates into a novel about painful love and becomes an adorable four-year-old child.

After she grows up, she will become the villainous second female lead in the novel. Not only will that happen, but her father is also a lazy bum!

Su Jiu is worried sick about her father.

“Daddy, you’re not allowed to eat anymore. Maintain your figure!”

“Daddy, there’s a shoot for you tomorrow. Prepare for it!”
“Daddy, pull yourself together! Don’t you want to find a stepmother for me?”
“Daddy, it’s time for you to receive the award. Think about your thank you speech!”

With Su Jiu’s help, her father, who is initially a deeply hated and unpopular celebrity, becomes the most popular celebrity in the nation and earns loads of money. As the only inheritor, Su Jiu owns assets worth billions of yuan. With such an enjoyable life, she can just play her life away. However—

Wait a moment! Why is the menacing, stubborn and evil villain courting her, instead of the main female lead?
She only showed some concern to him when he was a child. Why does he miss her so much?
Furthermore, isn’t he an emotionless money-making machine? Why is he doing this?
Many years later, the villain becomes the most powerful figure in the business and entertainment world. He even becomes her father’s boss!

As a father who dotes on his daughter, he realizes that there is an evil wolf eyeing his daughter. Hence, he fearfully educates her on all sorts of safety precautions. She must treasure her life and stay away from the villain!
However, the villain smirks menacingly. “Su Jiu, marry me. I’ll give you everything—even my life. Otherwise, I’ll blacklist your father and destroy everything that he has!”
Su Jiu is speechless. “…???”