Shock! The Spell Is In English! 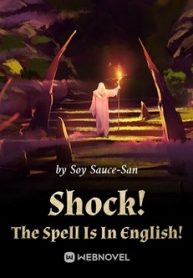 Shock! The Spell Is In English!

You’re reading Novel “ Shock! The Spell Is In English! ” on VIPNOVEL.COM

“Lugh woke up to find that he had transmigrated to a hundred million years later.
Earth was now in the midst of a magical era, where mages were icons of nobility, commanding the energies of the world and unleashing devastating spells. Despite his transmigration, Lugh realized that he was a piece of trash when it came to magic, but just as he was giving up on being a mage, he realized in shock that the world’s magics were written in English!
Unimaginable power could be obtained when the incantations are read. Saying Thousandfold Meditation accelerated training by ten thousand times, allowing one to reach the level of Archwizard in a single day.
Likewise, saying Super Flame Dragon would conjure a divine dragon of flames that stood ten thousand meters tall, while Billion Thunderbolts would summon dark clouds, with a billion thunderbolts descending upon a target in the blink of an eye.
Hence, with this special talent, Lugh became the youngest God of Mystics in the era of magic under a year! “