HOT The Beautiful Wife of the Whirlwind Marriage 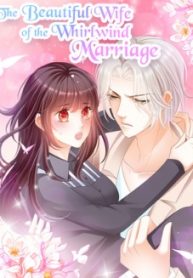 Wealthy, powerful and handsome; Gu Jingze is the cream of the crop in the entire country. Every guy wants to be him and every girl wants to be with him. His life is perfect… except that he has one tiny secret that keeps him from getting close to any woman—apparent impotency.

That is, until he wakes up in bed with a total stranger one day. The next thing he knows, he is forced to marry this stranger; a feisty and boisterous woman by the name of Lin Che.

Lin Che is an average girl whose only aim is to become a successful actress. Ostracized by her family and forced to become independent, she cooks up a scheme to attain her goal. But her plan fails and she ends up marrying this cold and seemingly heartless Gu Jingze. Not only that, she must now find her place in high society, where jealous women and devious plots lay abound – all while juggling her new career.

Two strangers under one roof: From the outset, they agree to stay out of each other’s lives, but he somehow always manages to appear during her moments of crisis. Slowly and unwittingly, Lin Che begins to find it difficult to imagine a future without him. Will their relationship grow, or is their marriage destined to remain just a contract?